The Scottish Collie Preservation Society was formed to preserve the old fashioned collie. This collie was originally bred to work the farms in Scotland and Whales. It has evolved over the years, but with the help of committed breeders, we are successfully bringing back the old fashioned collie that was built form to function to be a versatile working breed on the farms and elsewhere. 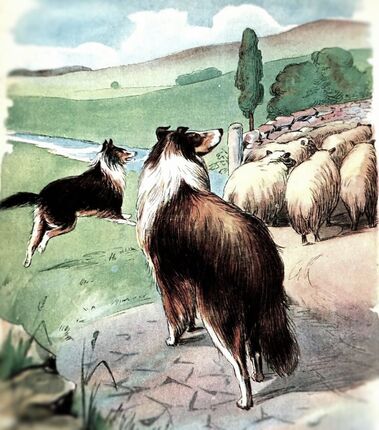 Rough Collie circa 1915
History of the Scottish Collie's evolution from the late 1800's- 1900's.
Both Rough and Smooth collies are descended from a localized variety of herding dog originating in Scotland and Wales. The Scottish variety was a large, strong, aggressive dog, bred to herd highland sheep. The Welsh variety was small and nimble, domesticated, friendly,  and also herded goats.  When the English saw these dogs at the Birmingham market, they interbred them with their own variety of sheepdogs, producing a mixture of ​short- and long-haired varieties. After the industrial revolution, dog ownership became fashionable, and these early collies were believed to have been crossed with the Borzoi (Russian Wolfhound) to get a more "noble" head (longer muzzle), which is today one of the true characteristics of the Rough Collie. It is not known conclusively if the Borzoi cross made it into the mainstream of the breed.
​
When Queen Victoria acquired a Rough Collie, after seeing one at Balmoral Castle, they were transformed into something of a fashion item. Continued breeding for show purposes drastically changed the appearance of the dogs; in the 1960s, it was a much taller dog than it is today in the UK (in the US, the size standard has not been revised downward and dogs have remained between 24-26"). Earlier dogs were also more sturdy in build and reportedly capable of covering up to 100 miles in one day. In the UK the Rough Collie is no longer used for serious herding, having been replaced by the Border Collie, though in the United States and a number of European countries, there has been a resurgence in the use of the Collie as a working and performance dog.
​
The Collie Club of America is one of the oldest breed-specific clubs in existence in the United States (founded in 1886). The Collie Club in England dates from 1881.

Quoted from Collie Club of America:
Unfortunately, the Collie's exact origins are shrouded in obscurity. It has been the subject of much research and speculation. The word "Collie" is as obscure as the breed itself. The name has been spelled many different ways: Coll, Colley, Coally and Coaly. Generally, the most accepted origin of the word is "Coll" - the Anglo-Saxon word for "black".
​
In the 18th century, the Rough Collie's natural home was in the highlands of Scotland, where he had been used for centuries as a sheepdog. The dogs were bred with great care in order to assist their masters in the herding and guarding of their flock.
​
Without a doubt, it is to the English fancy of the late 1800s that the breed owes its development as a popular show dog. Rough Collies were first exhibited in 1860 at the Birmingham, England dog show, in the generic class "Scotch Sheep-Dogs".

In 1879 the first English Rough Collie was imported to this country. It is from England that we find the famous pillars of the breed, from which the American fanciers sought not only their next big winner, but also their foundation stock.
​
​By the turn of the century, the American Rough Collie was in a state of continued development. The breed continued to flourish in England. American show prizes were dominated by the British imports. As a result of the imports, the breed made rapid progress between 1900 to 1920. These dogs built the foundations upon which the present day Rough Collie is based and paved the way for the emergence of the great American kennels of the 1920s and 1930s. (exerts from American kennels Club).